The History of Immanuel Lutheran Church

2016 – Pastor Bradley Ferch was ordained into the ministry of the Lutheran Church-Missouri Synod on July 19, 2016, and was called to serve as the pastor of Immanuel Lutheran Church, Davenport, Ia. He currently serves on the Lutheran Family Service Board of Directors, is the Circuit Pastor for the Lutheran Women’s Missionary League (LWML) and is our Circuit Visitor, a pastor who helps to oversee the other pastors within our circuit.

Born in Waterloo, Ia., Pastor Ferch lived in Elk Run Heights until moving to Readlyn, Ia. After graduating from high school, he enlisted into the United States Air Force and served for more than 8 years in various southern states before being honorably discharged. His final duty station was at Luke Air Force Base, Glendale, Ariz. He then served America’s Veterans at the Carl T. Hayden Veterans Administrative Hospital in Phoenix, Ariz., for an additional 13+ years.

In 1999, he married Carole, and they have two daughters, Madison and Lillian. Pastor Ferch attended Concordia Theological Seminary in Fort Wayne, Ind., where he graduated with a Masters of Divinity.

2015 - During our vacancy year, Immanuel was blessed to have two wonderful shepherds to serve as our pastors. Chaplain (Col.) Peter Mueller, First U.S. Army Rock Island Arsenal, handled our weekly services and Pastor David Anderson, Beautiful Savior Lutheran Church, Colona, Ill., and Eastside Mission, Davenport, Ia. fulfilled our weekday needs. They both served until we were blessed with a call from the seminary and a new chapter began at Immanuel.

2010 - In January, Pastor Chris Lockie became the pastor of Immanuel. Pastor Chris shared his time at Immanuel with the Davenport Lutheran Home until he was brought on as our full-time pastor in 2013. Pastor Chris received a call from Prince of Peace in Racine, Wis., which he accepted leaving us in November 2015.

2005 - Pastor Shaw accepted a call and Vacancy Pastors Dumer and Anderson split the duties until Pastor Chris Lockie accepted our call in January 2010.

1998 - Pastor Fred Schuester was appointed as our Vacancy Pastor after Pastor Krueger accepted a call to serve as pastor of Zion Lutheran Church, Hiawatha, Ia., in April 1998.

1988 - Rev. Daniel L. Krueger was installed as pastor on February 28, 1988. The Pioneer Club program, which ministered to children ages two through the sixth grade, was begun at Immanuel in September 1993.

1981 - On November 15, 1981, Rev. Clarence Pannier was installed as pastor of Immanuel after the retirement of Pastor Schember. Pastor Pannier served until his retirement in 1987.

1952 – It became evident that more room was needed for the fast-growing congregation. A committee was formed to find a location suitable for expansion. The present church property at 3834 Rockingham Road was purchased at a cost of $11,700. At that time, it was a 5.7-acre cornfield. After much deliberation, it was decided to first build the Parish Hall, which would serve as a Sanctuary until the Sanctuary could be funded.

Within 8 years the Parish Hall was debt free and six months later the parsonage was also paid off.

1946 - The Parish School closed on June 1, 1946, and the children of the congregation who desired parochial education were encouraged to attend Trinity Lutheran School. The members of Immanuel’s congregation paid the tuition of $90 per pupil per year.

1940 - Rev. Alvin Starke was installed as pastor on May 19, 1940. Pastor Bostelmann returned to Immanuel on August 18, 1940, as a guest preacher for the dedication of the new brick school, which had been constructed.

1939 - The enlarged and redecorated house of worship was dedicated on

1938 - A committee was appointed on May 16, 1938, to plan an addition to the church structure to accommodate the growth with which God had blessed the congregation.

1934 - Pastor Bostelmann served Immanuel until 1934, when he accepted a call to Immanuel Lutheran Church in Williamsburg, Ia.

Rev, Obert Kruger was installed as pastor on September 23, 1934, and served until March 1940, when he accepted a call to become a professor at Concordia College in Winfield, Kan.

1926 - On January 11, 1926, a school was opened with the Pastor Bostelmann serving as the teacher until Spring

of 1928. On February 28, 1926, at a special meeting of the voting assembly, the decision was made to purchase two lots from the Bawden family located at Elsie and Ada Avenues for $800. On April 11, a building committee was elected. Work began on July 23, and then on August 1, the cornerstone for a new church building was laid. The new church was dedicated on September 19, 1926. The chapel was a frame structure measuring 24’ x 20’ and served both as church and school. The pews, altar, baptismal font, communion ware and number boards were gifts from Trinity LCMS, Davenport, Ia.

John L. Smithiger, Clara J. Smithiger, Ethel K. Smithiger, Mathilda M. Hoehcst, Else E. Chase, Frank Roenfeldt, Ray Roenfeldt and Hilda M. Johannsen. On Sunday, September 15, 1925, the first organization meeting for the congregation was held. On October 25, 1925, the constitution was adopted and signed. On Sunday, November 1, the services were moved from the theater to a house located at 226 Rockingham Blvd., which also served as the parsonage.

1924 - The work of canvassing southwest Davenport was begun on November 13, 1924, by Rev. Albert Bostelmann, who had been assigned to this area by the Mission Board of the Iowa District, Lutheran Church Missouri Synod. The first services of Immanuel were held on December 7, 1924, in a theater called “Praiser Gardens” on Rockingham Road and Rockingham Blvd. There were six children present for Sunday School that first Sunday and five for the German service. There were none present for the English service. The following Sunday, two were present for the English service and from then on, both English and German services were conducted each Sunday.

In grateful response to God's grace and empowered by the Holy Spirit through Word and Sacraments, the mission of The Lutheran Church—Missouri Synod is vigorously to make known the love of Christ by word and deed within our churches, communities and the world. 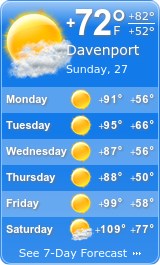